The discovery of an element is a rare occurrence. Defying racial and academic expectations, James A. Harris played a prominent role in the discovery of two elements. 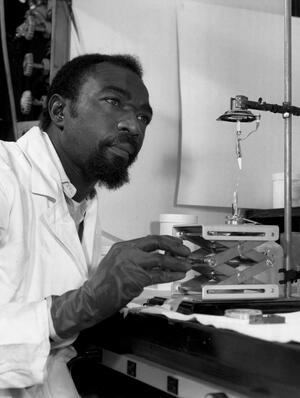 Harris, who grew up in both Texas and California, earned a bachelor’s degree in chemistry in 1953 from Huston-Tillotson College in Austin, Texas. He then served in the US Army, ultimately earning the rank of sergeant. After his honorable discharge from the Army, he struggled to find work as a chemist due to racial discrimination, as most potential employers did not accept that a Black man was qualified to work in science. Harris eventually landed a job as a radiochemist at Tracerlab in Richmond, California, in 1955, where he worked for 5 years.

His most noteworthy work was at Lawrence Berkeley National Laboratory in the 1960s and 1970s. Despite not having a PhD, Harris thrived at the national lab, leading the Heavy Isotopes Production Group as a part of the Nuclear Chemistry Division. His primary job was to prepare targets for the discovery of heavy elements. These are the materials that scientists bombard with elementary particles and nuclei from other atoms in order to forge new elements. While working with Harris to produce heavy elements, famed nuclear chemist Albert Ghiorso once noted that Harris’s target was “the best ever made for heavy element research.” A major factor in his successful preparation of these targets was his proficiency in executing difficult chemical separations.Thanks to Harris’s persistence and scientific acumen, his team discovered two elements: element 104, rutherfordium, and 105, dubnium.

Harris was an avid golfer, traveler, science communicator, and devoted family man,. He retired in 1988 after 28 years of service at LBNL. He died in 2000, leaving behind his wife and five children.

Read more about the lives of American Black chemists

C&EN: Black chemists you should know about